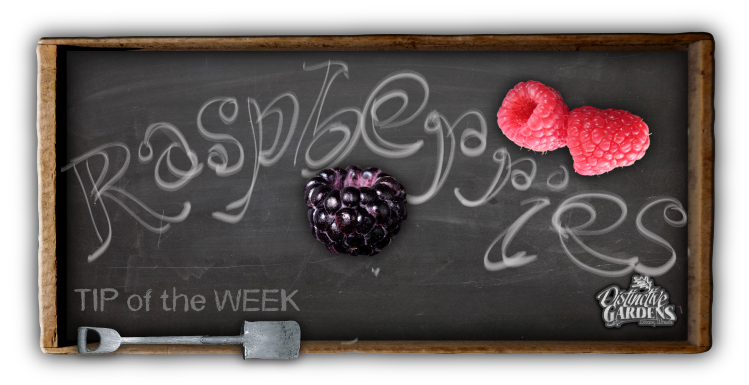 Of all the caned fruit, raspberries are my favorite.

I've grown both red and black and love the black.  Let's talk about the black raspberries.

Black raspberries need more room to grow because the brambles tend to grow larger.  I plant them on 3-foot centers.  You can plant closer, but it's just going to be harder to pick.  They bare fruit in June.  After fruiting, cut them back about 3 feet high with 3 to 5 canes per group.

Red raspberries aren't as wild as the black. You can put them closer together (say, on 2-foot centers) if needed.  Red raspberries fruit the same time as black, but you prune them when they are dormant in late winter.  Like the black cut them 3' high, 3 to 5 canes per clump.

One thing you can do is run some support wires in between the rows of the berries.  This helps to keep the canes upright making for easier picking. Run 2 wires about 18 inches apart horizontally between posts with cross bars. This set of wires should be about three feet off the ground. The raspberries then grow up between the wires and are supported. This creates a hedge of raspberries about 18 inches wide or so.

I've never had much problem with disease or bugs.  However, red raspberries attract Japanese Beetles.  I've never had them on the black.  Regular pruning helps reduce cane blight and other disease concerns. Viruses are also a potential disease problem. Plants infected with virus will appear stunted, dwarfed, and will be unproductive.

Raspberries are great to use fresh or for making jams or jellies.  As a kid we used to sell raspberries out of the back yard.  In Sterling, we would go to the wild field where the mall is now and pick black raspberries by the 5 gallon buckets full.  Our hands would be stained for weeks.